validated promoter controls for use in luciferase assays

Because no single promoter can be an ideal control for all experimental conditions, Active Motif offers a panel of positive and negative control constructs for the LightSwitch™ Promoter Reporter Vector. These controls are used to measure background, to optimize experimental conditions and to normalize for non-specific effects associated with a treatment or change in condition. Note that the unique RenSP luciferase technology utilized in the LightSwitch Assay System eliminates the need for co-transfection of a normalizing control in most cases. So, instead of one control construct being co-transfected with every experimental plasmid, different control vectors can be used in your reporter assay experiment, each in its own well, in addition to the constructs being tested. Using the most suitable positive and negative control vectors for your specific experiment will give you the highest degree of confidence in your results.

IMPORTANT:  Because all LightSwitch reporter constructs contain the optimized RenSP luciferase gene, you MUST use our LightSwitch Luciferase Assay Reagents to obtain optimal results. (Other luciferase assay reagents are not compatible with RenSP.)

Empty promoter vector: The empty promoter vector contains the RenSP luciferase reporter gene without a promoter. This construct serves as a measure of background signal in the experiment. This construct may also be used to create additional experimental constructs. For a vector map, annotations and primer & restriction sites, please see the Empty LightSwitch™ Reporter Vectors page.

Housekeeping gene promoter vectors: Housekeeping control constructs contain promoters for common housekeeping genes driving the RenSP luciferase reporter gene. These constructs serve as positive transfection controls and may also serve as controls for comparing signals between conditions if they are known to be unresponsive to the test condition. 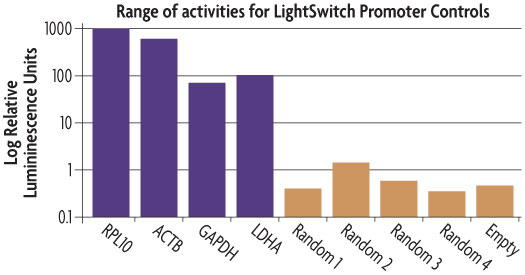