The LightSwitch™ Luciferase Assay System includes over 30,000 regulatory elements from the human genome that have been cloned into LightSwitch reporter vectors. With pre-cloned human promoters, lncRNA promoters and 3´UTRs available as transfection-ready LightSwitch luciferase reporter constructs, you can perform your reporter assay experiments immediately. Especially convenient are the Validated Pathway Collections, which are promoter constructs that showed significant activation or repression in response to in-house, pathway-specific induction testing. The LightSwitch System makes it easy for you to measure the transcriptional and post-transcription regulation of any gene in the genome.

To find LightSwitch GoClone® constructs that contain the promoters of your genes of interest, use the box below to search the LightSwitch Promoter Reporter Collection. Place your order using the specific Product ID(s) you find for the clone(s) you wish to order. As we cannot stock every GoClone® in all of our offices, delivery may take 10-14 days.   Click here for Search Tips »

IMPORTANT:  Because all LightSwitch reporter constructs contain the optimized RenSP luciferase gene, you MUST use our LightSwitch Luciferase Assay Reagents to obtain optimal results. (Other luciferase assay reagents are not compatible with RenSP.) We also recommend that you include appropriate positive & negative control vectors when you perform your assays. 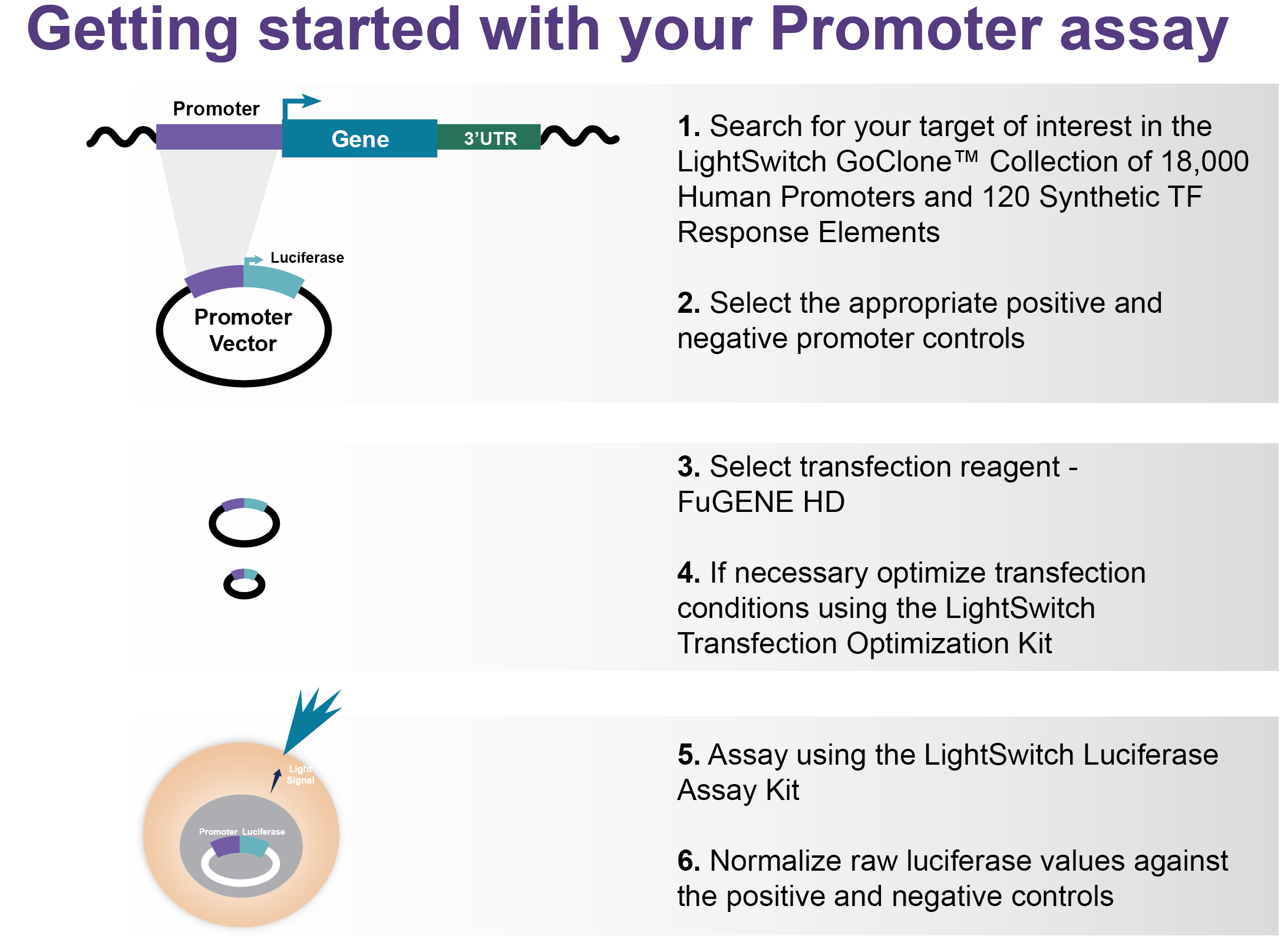 The LightSwitch Promoter Reporter Collection makes it possible to measure the functional response of promoters to stimulus in nearly any cell-based system. Plus, advances in gene assay reagent and transfection technology eliminate the need for co-transfection in most studies.

Transcription factors are important regulators of eukaryotic transcriptional regulation, and they interact with DNA-encoded regulatory elements like promoters to modulate when, where and how much of a gene’s mRNA gets made. The activity of transcription factors can be affected by the cell’s environmental conditions including exposure to signaling molecules like hormones and growth factors. Reporter assays are a powerful technique for measuring the activity of promoters in living cells. LightSwitch Reporter Constructs are created by isolating a promoter from the human genome and cloning it upstream of the RenSP luciferase reporter gene on a plasmid. Once this plasmid is transfected into a living cell, a change in promoter activity causes a change in the reporter signal (light output). 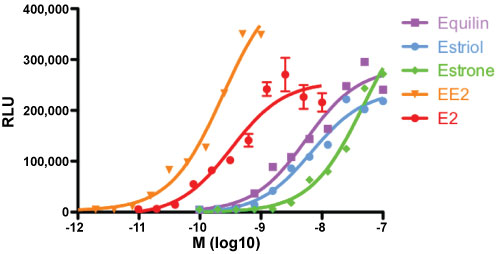 Dose response data is shown for the SYT8 promoter (Product ID S714388) for five different estrogenic compounds. The graph summarizes the luciferase activity of this promoter in HT1080 human fibrosarcoma cells that were co-transfected with an ER cDNA expression plasmid and then treated with various concentrations of estrogen compounds for 24 hours before the luminescence was measured using the LightSwitch Luciferase Assay Kit. The Y-axis shows the relative luminescent values while the X-axis shows the molar concentration of compound on a log10 scale. The Coefficients of Variance (CVs) ranged from 10% to 12%.

Our scientists created the LightSwitch Promoter Reporter Collection by using an algorithm to evaluate over 5 million human cDNA sequences in order to identify transcription start sites (TSS) throughout the human genome. Based on these TSS predictions, over 18,000 human promoter sequences of ~1 kb (-900…+100 bp relative to the TSS) were cloned into the pLightSwitch_Prom reporter vector, which utilizes the novel, engineered RenSP luciferase gene. After transfection, luciferase activity is assayed using the optimized regents found in LightSwitch Luciferase Assay Kit.

In addition to the over 18K endogenous promoter clones that make up the LightSwitch Promoter Reporter Collection, Active Motif also offers a collection of LightSwitch Synthetic Response Elements. These constructs contain repeats of a transcription factor binding site motif, cloned upstream of a minimal HSV-TK promoter and the RenSP luciferase gene in the Long-range Enhancer Reporter Vector, pLightSwitch_LR vector. This makes them ideal for use as a primary screen to identify compounds or conditions that affect the activity of a biological pathway. Afterward, a secondary screen can be performed using related endogenous promoter reporter constructs to detect subtle differences between compounds or conditions. 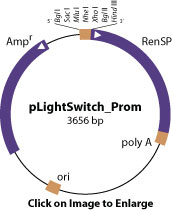 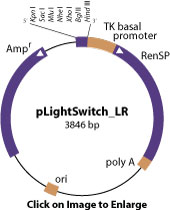 The following publications cite the use of and/or provide additional information about the LightSwitch Luciferase Assay System: