The EpiShear Probe Sonicator is a compact unit that is rated at 120 watts. With the supplied 1/8" microtip probe, it is capable of processing samples from 500 µl to 15 ml. (Other sizes of microtips are available, which enable the unit to be used with samples from 200 µl up to 50 ml; see Sonicator Accessories.) For additional technical information, please see the Specifications tab.

Key features of the unit are the ability to vary the amplitude of power delivered and to deliver the power in a pulse mode. As sonication generates heat, programming the unit to pulse on and off can be used to prevent heat build up in temperature-sensitive samples. In addition, pulsing enhances processing by allowing the material to settle back under the probe after each burst.

EpiShear has a digital display that makes it easy to program the amplitude and to set the total sonication time, as well as the duration of the On and Off pulse cycles (Figure 1). It also makes it easy to monitor and change sonication parameters, if desired. The display also shows the total elapsed time, and provides real-time energy monitoring of both wattage and joules. Taken together, the many features provided by the EpiShear Probe Sonicator make it possible to obtain more reproducible results when you perform subsequent sonications.

Figure 1: The digital display and keypad of the EpiShear Probe Sonicator.

Shear chromatin for ChIP and DNA for next-gen sequencing

The EpiShear Probe Sonicator can be used to shear samples of chromatin or DNA for use in ChIP (Figure 1), DNA methylation studies and next-gen sequencing. 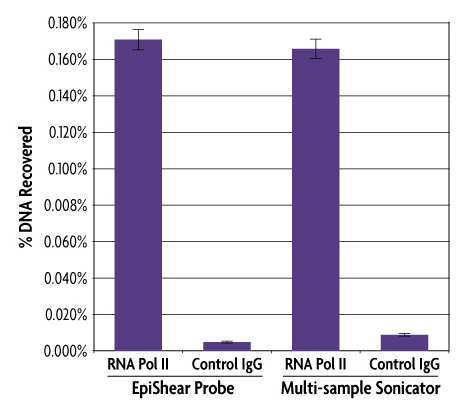 Sheared chromatin was prepared from HeLa cells for ChIP using the reagents found in the ChIP-IT® Express Kit and either the EpiShear Probe Sonicator or a multi-sample sonicator. ChIP-IT Express was used to perform ChIP with either RNA pol II mouse mAb or a control IgG, then qPCR was performed using a GAPDH primer set. 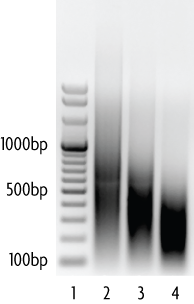 HeLa cells were fixed for 10 minutes with 1% formaldehyde and then chromatin was prepared using the shearing buffers included in the ChIP-IT® Express Kit. Three samples of approximately 300 µl each were sheared with 5, 10 and 20 pulses at 25% amplitude using the EpiShear Probe Sonicator with a 1/8" microtip probe. Each pulse consisted of a 20-second sonication followed by a 30-second rest on ice to prevent heat build up. The sheared and unsheared chromatin samples were subjected to cross-link reversal, treated with Proteinase K and RNase A, then phenol/chloroform extracted and precipitated as described in the protocol. Samples were separated by electrophoresis through a 1% agarose gel. Optimally sheared chromatin will yield a smear between 200-1000 bp.

Note: From this experiment, the DNA sonicated for both 5 and 10 pulses are suitable for use in ChIP.

In sonication, electrical energy is converted into physical vibrations (sound energy in the form of ultrasonic waves), which are used to process the sample. First, an electronic generator is used to transform conventional AC line power (50/60 Hz) into high-frequency electricity (20,000 Hz). The 20 kHz electricity then drives a piezoelectric converter/transducer. The electrical energy is converted by the transducer to mechanical vibration due to the characteristics of the converter’s internal piezoelectric crystals.

The vibration is amplified and transmitted down the length of a probe, which longitudinally expands and contracts at the tip. The distance the tip travels travels is dependent on the amplitude selected by the user through the unit’s keypad. As you increase the amplitude setting, the sonication intensity will increase within your sample.

Active Motif's EpiShear Probe Sonicator utilizes  direct sonication, as the tip of the probe is inserted directly into the sample. This direct contact results in a high-intensity energy transfer, so the sample is processed relatively quickly. Because the diameter of the probe tip dictates the amount of sample that can be effectively processed, both small and larger samples can be sheared simply by changing the size of the probe used. Smaller tip diameters deliver high-intensity sonication, but the energy is focused within a small, concentrated area. Larger tip diameters can process larger volumes, but offer lower intensity so may require a longer processing time depending on the application. The 120-watt generator supplied with the EpiShear Probe Sonicator can be used with 3 different sizes of probes, giving it the ability to shear samples ranging from 200 µl to 50 ml. The primary advantages of direct sonication are that the processing times are usually fast and it provides the flexibility of being able to process a large range of sample sizes at a lower cost.

Relationship of Amplitude and Wattage

Sonication power is measured in watts. Amplitude is a measurement of the excursion of the tip of the probe (the distance the probe moves away from and back to its point of equilibrium).

The ultrasonic processor was designed to deliver constant amplitude to your liquid sample, regardless of the changes in load. As a liquid is processed, the load on the probe will vary due to changes in the liquid sample (i.e. viscosity, concentration, temperature, etc.). For example, the unit experiences a higher load when processing viscous samples as compared to aqueous samples.

During operation, the EpiShear generator displays the wattage, which is the energy required to drive the radiating face of the probe at the specific amplitude setting against the load being experienced at that instant. As the resistance to the movement of the probe increases or decreases (changing the load), more or less power will be delivered by the power supply to ensure that the excursion at the probe tip remains constant. Therefore, while the displayed wattage readings will vary as the load changes, the amplitude will remain the same.

Because of this, use of a higher-wattage generator does not automatically mean that more power will be transmitted to the liquid. And, programming the amplitude at 100% does not mean that the generator will deliver its maximum wattage. The amount of power delivered at any given moment will be only what is required to maintain the set amplitude.

The AMPLITUDE control enables the ultrasonic vibrations at the probe tip to be set to any desired level. Although the degree of cavitation/ultrasonic energy required to process the sample can readily be determined by visual observation, the amount of power required cannot be pre-determined. A sensing network continuously monitors the output requirements and automatically adjusts the power to maintain the amplitude at the pre-selected level. The greater the resistance to the movement of the probe due to higher viscosity, deeper immersion of the probe into the sample, larger probe diameter or higher pressure, the greater the amount of power that will be delivered to the probe.

Setting the AMPLITUDE control to its maximum will not cause the maximum power rating of the unit to be delivered to the sample. The maximum power (120 watts) that the EpiShear Probe Sonicator is capable of delivering will only be delivered when the resistance to the movement of the probe is high enough to draw maximum wattage.

It is the intensity of cavitation that measures the effectiveness of the sonication, not the total power applied to the system. Intensity is directly related to the amplitude of the radiating face of the probe tip. It is amplitude that must be provided, maintained and monitored. The unit delivers controlled amplitude under varying load conditions in order to provide reproducible results.