Bisulfite Conversion is a method used to make it easy to distinguish methylated from unmethylated cytosines in genomic DNA at single base resolution. 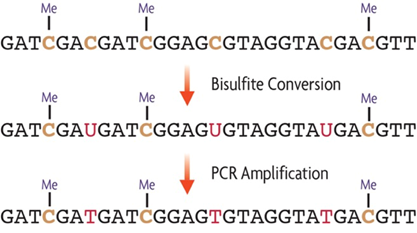 Active Motif's FFPE Bisulfite Conversion Kit is designed to work with formalin-fixed, paraffin-embedded (FFPE) tissue sections, which are highly valuable for their ability to relate clinical outcomes to disease states and epigenetic profiles. The kit includes everything required for DNA isolation from FFPE tissue sections or unsectioned core samples, bisulfite conversion, desulfonation and on-column DNA purification, with a greater than 99% conversion efficiency and 80% recovery of the DNA.

Reduced Representation Bisulfite Sequencing (RRBS) uses restriction enzymes together with DNA size selection to greatly reduce the percentage of the genome that must be sequenced. DNA is first digested using methylation-insensitive restriction enzymes (commonly MspI) which generate fragments containing CpG dinucleotides at the ends. Fragments are then adapter ligated and size selected so that CpG rich regions of DNA are captured. Enriched fragments can then be bisulfite converted and amplified to reveal methylated cytosines and sequenced. RRBS captures 80-85% of CpG islands and 50-60% of human promoters while sequencing only 3% of the genome.

Advantages: Can sequence regions dense in CpG methylation genome wide at single-base resolution for lower cost than WGBS.
Disadvantages: Restriction enzymes are biased. There is no coverage of non CpG rich areas. Misses 85-90% of CpGs in the genome.
Best Uses: Good method to scan for changes in CpG rich regions like promotors which are commonly abnormally methylated in diseases such as cancer.

Targeted bisulfite sequencing allows for very accurate analysis of methylation at single nucleotide resolution of specific regions of interest. It begins with bisulfite conversion of DNA and then uses primers to PCR amplify targeted loci. These amplicons then undergo library construction and are sequenced. By limiting sequencing to a small number of multiplexed amplicons, high sequencing depth of the cytosines is achieved for those regions at low cost.

Methylation-specific PCR (MSP) is used to probe targeted regions for methylation after bisulfite conversion. It uses two different methylation specific primer sets, one which complements methylated DNA and one which complements unmethylated DNA. PCR can be performed to amplify the targeted DNA and PCR products run on a gel to visualize which primer set produced more amplified product. Alternatively, a TaqMan® probe approach can be used where methylation specific fluorescent probes are bound to DNA and non-methylation specific PCR primers are used to amplify the region. Upon amplification, bound probes are degraded by Taq polymerase, so that light emitted from the probe increases. An increase in the signal for either the methylated or unmethylated specific probe indicates the methylation state of the DNA.

Advantages: Low cost, fast execution.
Disadvantages: Can be difficult to design primers as they require at least five thymines.
Best Uses: Best suited for assessing methylation in a small number of regions of interest.

Often referred to as the “gold standard” for analysis of DNA methylation, Whole Genome Bisulfite Sequencing (WGBS) provides the greatest coverage and resolution of any DNA methylation analysis technique. Genomic DNA is first isolated and undergoes bisulfite conversion. The DNA is then adapter ligated and used to prepare a sequencing library. Following sequencing, DNA is bioinformatically analyzed to reveal methylated cytosines across the entire genome. The drawback to such comprehensive coverage is that the DNA is costly to sequence and complex to analyze.

Advantages: Single-nucleotide resolution of DNA methylation across the entire genome.
Disadvantages: Expensive and time-consuming sequencing analysis. Not practical for high throughput.
Best Uses: Ideal when interested in low-CpG-density regions, intergenic “gene deserts”, or partially methylated domains and distal regulatory elements, that would be missed by RRBS.

Advantages: Easy to use. Reproducible. Can be used with FFPE samples.
Disadvantages: Arrays work for human or mouse DNA only. Many methylation sites are included in the assay. Covers most CpG islands (>96%) but less than 2% of CpG sites in human genome.
Best Uses: Great for clinical screening of samples for aberrant methylation differences in CpG islands.