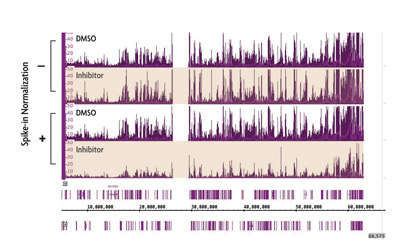 How does the ChIP Spike-in Normalization Strategy work? 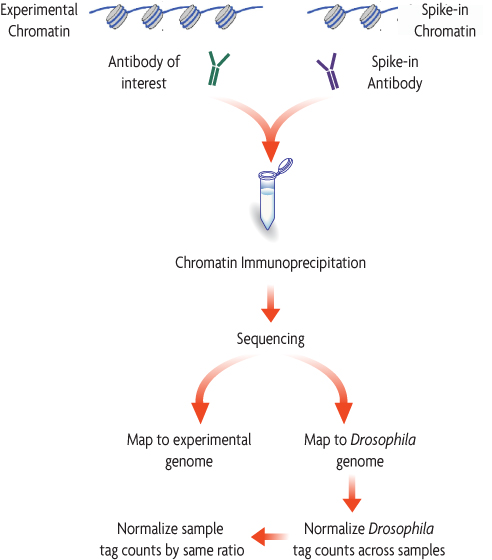 Reduce the Effects of Technical Variation

The ChIP Normalization Strategy is ideal to correct for differences that results from sample loss, amplification bias, uneven sequencing read depth or hand-to-hand differences between users. By utilizing the differences observed between samples with the Spike-in chromatin, a normalization factor is created and applied to the experimental samples to normalize out the effects of technical variation. 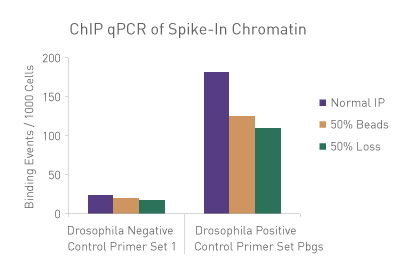 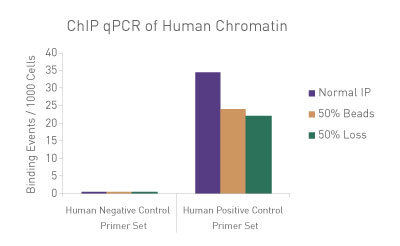 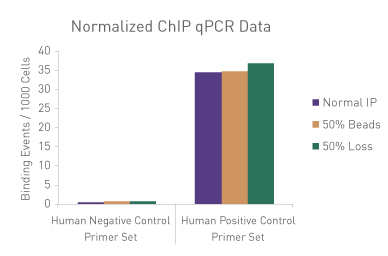 A ChIP qPCR reaction was set up with 750 ng of Spike-in chromatin added to 30 µg of human chromatin. Both Spike-in Antibody (2 µg) and a Histone H3K27me3 antibody (4 µg) were also added to the ChIP reaction. ChIP was performed according to Active Motif's ChIP-IT High Sensitivity protocol (Catalog No. 53040), however, one sample was left as normal, one sample was given only 50% of the Protein G beads and the third sample had 50% of the IP volume removed. Enriched DNA was analyzed by qPCR using both Drosophila-specific primers and Human-specific primers for each sample. The results show the effects of these sample differences on the enrichment. The Drosophila data was used to create a normalization factor for each sample. This normalization factor was then applied to each Human data point. The normalized data reveals comparable ChIP qPCR results following the removal of technical variation effects, validating the Spike-in strategy for normalization.

By adding Spike-in Chromatin and Spike-in Antibody to standard ChIP reactions, experimental data can be normalized for sample variation. This normalization makes it easier to monitor the effects of experimental conditions, such as inhibitory compounds or mutants to reveal biological differences.

ChIP-Seq was performed on untreated cells and cells treated with a small molecule inhibitor of EZH2 methyltransferase. Using standard ChIP-Seq analysis (–) the differences in signal are not detected. Incorporation of the Spike-in Normalization Strategy (+) reveals the expected decrease in H3K27me3 ChIP-Seq signal confirming the value of the normalization strategy for detecting biological changes. 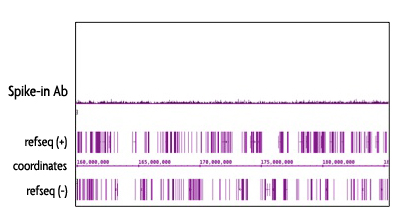 Figure 3: Specificy of the Spike-in Antibody.

The Spike-in antibody shows minimal cross reactivity with mammalian samples. When the Spike-in antibody was tested in ChIP-Seq with human chromatin, there is little to no signal detected. This demonstrates the specificity of the spike-in normalization strategy.