p300 Tools and Services for Research and Drug Discovery

Active Motif offers a workflow of research tools and approaches to characterize the complex functions of p300/CBP.

p300 and CBP (CREB Binding Protein) are transcriptional co-activators that regulate gene expression through acetylation of histones and chromatin remodeling. p300 interacts with over 50 intracellular proteins affecting a range of signaling pathways, while mutations in p300 can lead to dysregulated cell growth and division, and are implicated in acute myeloid leukemia (AML) and multiple solid tumor types. 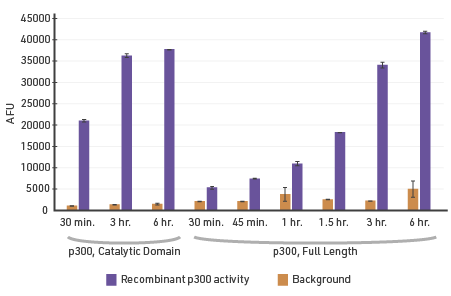 ChIP was performed using the ChIP-IT® High Sensitivity Kit (Cat. No. 53040) with chromatin from 4.5 million LNCaP cells and 5 µl of p300 antibody (Cat. No. 61401). ChIP DNA was sequenced on the Illumina HiSeq and 15 million sequence tags were mapped to identify p300 binding sites. p300 along with H3K4me1 are markers of active enhancer elements and are therefore expected to co-localize. A sampling of the p300 ChIP-Seq data shows the expected co-localization of p300 and H3K4me1.