Information regarding histone modifications, their biological relevance and the proteins involved in their regulation.

The three billion base pairs of DNA in each of your cells are incorporated into chromatin by associating with a group of small evolutionarily conserved proteins, the histones. Two molecules each of the core histone proteins (H2A, H2B, H3 and H4) form an octamer where ~147 bp of DNA wraps around it to create the fundamental repeating subunit of chromatin, the nucleosome. A specialized histone (linker histone H1) functions to further compact the tens of millions of nucleosomes into more highly ordered structures. It is this compacted DNA-protein complex that serves as the template for all DNA-dependent processes including DNA replication, repair, recombination, chromo­some segregation and gene expression.

It has long been known that the histones are subject to a variety of post-translational modifications (phosphorylation, acetylation, ubiquitylation, methylation: two different types – arginine and lysine) and that these modifications play important roles in chromatin structure and function. With regard to transcriptional regulation, increases in histone acetylation and specific methylation events (H3 lysine 4 & lysine 36 methylation) are generally associated with increased gene expression, while decreased acetylation and other histone methylation events (H3 lysine 9 and lysine 27 methylation) are hallmarks of decreased gene expression (See reference 6 for a recent review). 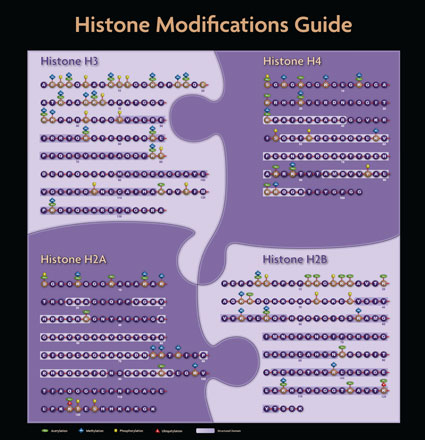