Embryonic stem cells (ESCs) are cells derived from the inner cell mass of the developing pre-implantation embryo that gives rise to endoderm, ectoderm and mesoderm. ESCs are unique from all other cells types in that they can differentiate into essentially all cell types in the developing and adult organism, a phenomenon termed pluripotency. They also have the ability to divide into cells that have the same developmental state as the parent (self-renewal). The ability of a cell to remain pluripotent and to self-renew requires the establishment of very complex gene regulation programs. Embryonic stem cells must facilitate the expression of genes required for self-renewal and pluripotency, but at the same time maintain all genes involved in lineage commitment and differentiation in a repressed state.

Unlike the cells that are derived from them, embryonic stem cells by their very nature have unlimited developmental potential. Differentiated cells however, like a neuron or muscle cell, have lost the ability (without intervention by the researcher) to be anything other than what they have become. Because ESCs are genetically identical to all of the cells that are derived from them, the primary difference between them is not explained by genetics but rather by epigenetics.

The Polycomb proteins are important epigenetic determinants of stem cell identity. They play an important role, serving to help determine whether stem cells remain pluripotent or commit to a more specific cell fate. Originally identified in Drosophila as repressors of genes involved in body plan, Polycomb proteins are segregated into one of two protein complexes, Polycomb Repressive Complexes 1 and 2 (PRC1 and PRC2; see Table 1). As some Polycomb complex subunits have multiple potential component proteins (e.g. there exist four isoforms of EED), various versions of PRC1 and PRC2 complexes have been identified. 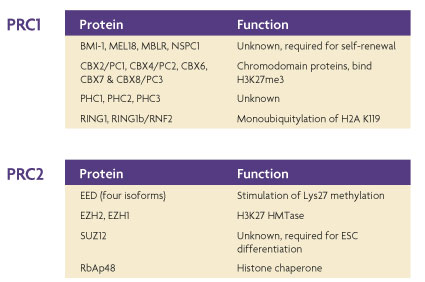 In flies, Polycomb complexes are recruited to specific DNA sequences (termed Polycomb Response Elements or PREs) through the DNA binding protein Polyhomeotic (Ph). Although no mammalian PRE sequences have been identified, there are several potential DNA-binding recruitment proteins, including OCT4, YY1, JARID2, PCL2/MTF2 and AEBP2. Non-coding RNAs, such as HOTAIR, have also been implicated in the recruitment of PRC2.

Once associated with chromatin, the PRC2 subunit EZH2 catalyzes trimethylation of histone H3 at Lys27 (H3K27me3; see Figure 1). H3K27me3 has long been known as a hallmark of regions of repressed chromatin. Trimethylation of Lys27 leads to the recruitment of PRC1 through the binding of H3K27me3 by chromodomain-containing proteins in PRC1. Interaction of PRC1 with nonadjacent regions of chromatin marked by H3 Lys27 trimethylation may contribute to silencing through the establishment of a domain of specialized chromatin structure that represses gene expression. PRC1 also includes a histone modifying enzyme, Ring1b, which catalyzes the monoubiquitylation of histone H2A at Lys119 (H2AK119ub1). H2AK119ub1 has been found to repress transcript elongation by RNA polymerase II.

The above recruitment and repression model is more complex than described, as many key regulatory genes in stem cells are found in "bivalent" chromatin domains. These bivalent domains, which exhibit hallmarks of both active (H3K4me3) and repressed (H3K27me3) chromatin, are thought to represent a gene poised for either expression or repression. Upon differentiation, bivalent domains are resolved, depending upon the resulting expression state. Genes that are expressed in the target cell type maintain histone H3 Lys4 methylation. Markers of other cell types lose Lys4 methylation but retain the Lys27 methylation and thus go from poised to silent.

In addition to cell type-specific genes and those involved in lineage commitment and differentiation, targets of Polycomb repression in stem cells include tumor suppressors, to prevent cell senescence and potentially promote proliferation. Genes involved in apoptosis are also repressed in a Polycomb-dependant fashion. In terminally differentiated cells, Polycomb proteins participate in the repression of pluripotency and stem cell-specific genes, as well as genes expressed in other cell types. 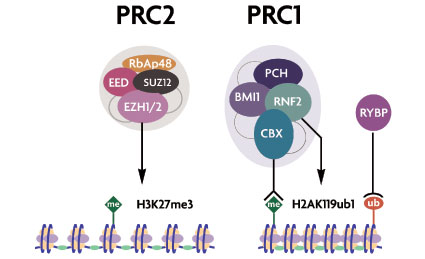 PRC2 is recruited to chromatin which allows trimethylation of histone H3 Lys27 by EZH2. PRC1 is then recruited to chromatin through the recognition of H3K27me3 by chromobox (CBX) proteins via the chromodomain. RNF2/RING1 homologs are E3 ubiquitin ligases for H2A, which is monoubiquitylated at Lys119. The RYBP repressor protein recognizes H2A monoubiquitylation, contributing to transcriptional repression. Combined, these activities induce and maintain transcriptional repression. Gray circular outlines depict other PRC subunits and associated proteins.

It is essential to regulate stem cell self-renewal and orchestrate the differentiation process, and it is clear that Polycomb proteins are a crucial part of this regulation. Cells lacking EED or SUZ12 show aberrant expression of lineagespecific genes which interfere with their ability to differentiate properly. Differentiation is also hampered by the inability to repress pluripotency genes. Mutations in Polycomb proteins are also linked to the establishment of cancer, as aberrant Polycomb function can produce cancer stem cells that exhibit inappropriate differentiation and perpetual self-renewal.