Chromeo™ 642 is a bright, dark-red fluorescent label that replaces Cy5*, Alexa Fluor 647*, DyLight 649* and other dyes excitable within a wavelength range of 630-650 nm. It exhibits superior luminescence properties, a broad Stokes shift, stability towards photobleaching and pH, and low cell toxicity. Chromeo 642 is compatible with various excitation sources including tungsten and xenon arc lamps, the Helium-Neon laser, the 647 line of the Argon-Krypton-Ion Laser and common red diode lasers with emissions of 635 nm or 650 nm.

Reactive fluorescent Chromeo 642 serves as a bright label for antibodies and other biomolecules, enabling detection in immunofluorescence, high content screening, ELISA and FRET applications, as well as in flow cytometry.

To ensure that you get the best possible results in your immunofluorescent staining, we recommend the use of Chromeo 642 together with our complete line of MAX Stain™ Immunofluorescence Tools, as those components have been formulated to optimize the performance of all Fluorescent Chromeo™ Dyes.

Chromeo™ 642 is a bright, dark-red fluorescent dye that can be excited at 630-650 nm. The dye is very stable over a broad pH range and, in combination with the MAX Stain™ reagents, it shows high fluorescence intensity and photostability. Chromeo 642 and Chromeo 642 dyes are the best choice to replace dyes like Cy5, Alexa Fluor 647, DyLight 649 and their conjugates. 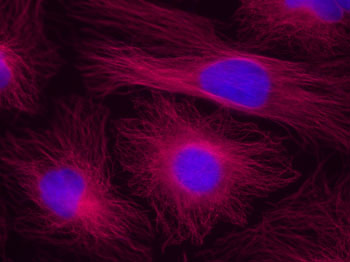 HeLa cells were stained with alpha Tubulin mouse mAb (Clone 5-B-1-2) and Chromeo 642 Goat anti-mouse IgG. The nuclei have been counterstained with DAPI. 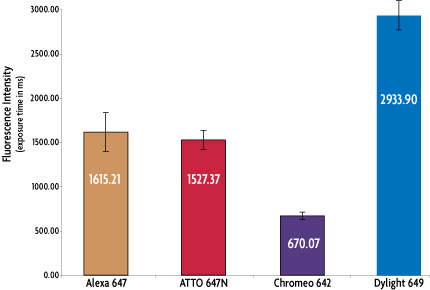 In a second set of experiments, MAX Stain reagents were used to study the photostability of different dark-red emitting antibody-dye conjugates. Again, anti-tubulin staining was performed in HeLa cells. The cells were excited over a period of 80 seconds: images were acquired every 3.5 seconds, with an exposure time of 3 seconds for each image. Figure 3 is a plot of the fluorescence intensity of the various antibody-dye conjugates relative to the illumination time. The Chromeo 642 conjugate exhibits photostability that is comparable to that of the other conjugates tested. 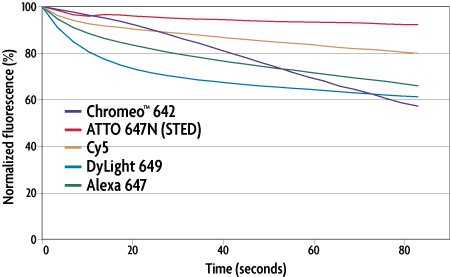 HeLa cells were either left untreated or treated with 100 µM etoposide for 6 hours prior to fixation with methanol. The histone-variant H2AX was stained with Histone H2AX phospho Ser139 rabbit pAb (Catalog No. 39117) and Chromeo 642 Goat anti-rabbit IgG, while tubulin was visualized using alpha Tubulin mouse mAb (Clone 5-B-1-2) and Chromeo 488 Goat anti-mouse IgG. The nuclei were counter-stained with DAPI and the three separate images were merged.

The following selected publications cite the use of and/or provide additional information about Chromeo 642:

“Set of fluorochromophores in the wavelength range from 450 to 700 nm and suitable for labeling proteins and amino-modified DNA” by Wetzel et al (2003) Journal of Chromatography B 793:83-92.
“A new Fluorescence Resonance Energy Transfer Pair and its Application to Oligonucleotide Labeling and Resonance Energy Transfer Hybridization Studies” by Gruber et al (2005) J. of Fluorescence 15:207-214.
“A Resonance Energy Transfer Immunoassay Based on a Thiol-Reactive Ruthenium Donor Dye and a Longwave-Emitting Acceptor” by Weh et al (2007) ChemBioChem 8:122-128.
“Fluorescent Silica Nanoparticles” by Maderet al (2008) Ann. N.Y. Acad. Sci. 1130:218-223.
“Colloidal silica nanoparticles for use in click chemistry-based conjugations and florescent affinity assays” by Achatzet al (2011) Sensors and Actuators B 150:211-219.
“Probing the electromagnetic field of a 15-nanometre hotspot by single molecule imaging” by Canget al (2011) Nature 469:385-388.

The Chromeo 642 Antibody Labeling Kit has been cited in the following publications:

Chromeo 642 conjugated Fluorescent Secondary Antibodies have been cited in the following publications:

“The ABC transporter-encoding gene AFR1 affects the resistance of Cryptococcus neoformans to microglia-mediated antifungal activity by delaying phagosomal maturation” by Orsi et al (2009) FEMS yeast res. 9:301-310.
“p-ERK1/2 is a predictive factor of response to erythropoiesis-stimulating agents in low/int-1 myelodysplastic syndromes” by Frisan et al (2010) Haematologica 95(11):1964-1968.
“Role of the (Mn)superoxide dismutase of Enterococcus faecalis in the in vitro interaction with microglia” by Peppoloni et al (2011) Microbiology 157:1816-1822.