How Epigenetics & RNA Can Help Save the Honey Bees

Honey bee colonies are comprised of just a few different “castes” or types of bees – the queen bee, the worker bee, and the drones. There is generally only one queen bee in each hive, and all of the other bees are either female workers or male drones.

It has been known for many years that honey bee larvae that exclusively eat royal jelly develop into queens, and all other larvae develop into either worker bees or drones, but the exact molecular mechanisms behind this amazing biological process have not been completely defined.

A new paper published recently in the journal Cell Reports demonstrated a new role for the RNAi pathway to help explain the properties of royal jelly.

How Do Queen Bees Become Queens?

Queen bees are obviously very important members of the beehive. The queens are the only honey bees that can lay eggs, and therefore the future of the hive literally depends on them being reproductively healthy.

How are Queen Bees “Chosen”?

Whether or not a honey bee will become a queen is not decided by their genetics – every fertilized egg laid by an existing queen bee has the potential to develop into either another fertile queen bee or a sterile female worker bee. It’s interesting to point out that unfertilized honey bee eggs laid by a queen will develop into drones, which are fertile males.

Whether the fertilized eggs develop into queen bees or worker bees depends on their diet as larvae. All larvae feed on royal jelly for a few days after hatching, but most larvae eventually make the switch to eating a mixture of pollen and nectar. Larvae that are fed exclusively royal jelly will continue the development process to become a queen bee.

Existing queen bees will start laying fertilized eggs in specialized compartments called “queen cups” in the honeycomb created by worker bees when conditions are right for there to be a new queen. Larvae in these queen cups are fed royal jelly by the nurse worker bees after they hatch to ensure that they develop into queens.

What is Royal Jelly & How Does it Turn Honey Bee Larva into a Queen Bee?

How Does Royal Jelly & Royalactin Work?

Honey bees that exclusively eat large amounts of royal jelly during development become queen bees through epigenetic mechanisms. As mentioned above, all fertilized eggs have the potential to become a queen, it is not decided by classical genetics. The epigenetic changes induced by consuming the royal jelly are primarily manifested as changes in DNA methylation patterns, but there are also changes in histone modifications and expression of non-coding RNAs as well.

One of the major MRJPs present in royal jelly is MRJP1, which is also known as Royalactin because it is one of the main drivers of the epigenetic changes that lead to the queen bee phenotype. It is not completely understood how Royalactin contributes to the epigenetic changes associated with developing into a queen, and it is also not clear what other proteins or metabolites present in royal jelly play important roles in the queen bee development process.

Is RNAi the Missing Link in Queen Bee Development?

A recent paper published in the journal Cell Reports from a team of researchers in the United Kingdom and Israel described observations that royal jelly contains transmissible RNAs that might contribute to the queen phenotype and confer other properties and benefits to beehive populations.

The researchers also identified naturally-occurring RNAs in royal jelly, and the RNA sequences they discovered likely have RNAi targets in honey bee genes as well as targets in transposable elements, viruses, bacteria, and fungi, suggesting that they may protect honey bee larvae from infections, in addition to their role in promoting the queen developmental phenotype.

The global honey bee population is decreasing, and since these insects are so critical to our worldwide food supply due to their ability to pollinate food crops, it is critical that we do everything we can to make sure honey bees are healthy and that their populations are stable.

There are many threats to honey bees, including insecticides and pesticides, pathogens like mites and viruses, and global climate change. One potential way to help with some of these threats is to program the honey bee royal jelly to confer resistance to microbes or to alter the metabolic effects of chemical pesticides.

One of the key findings published by Eyal Maori and colleagues in their Cell Reports paper was that they were able to artificially add dsRNA to royal jelly, and when that dsRNA was consumed, it became systemically spread throughout the insects and was also transmitted in the new royal jelly secreted by nurse worker bees.

Importantly, the researchers demonstrated that the dsRNA secreted in the royal jelly was active and led to long-lasting RNAi effects when consumed by the next generation of bee larvae – confirming that the process really is transferable. Approaches like this could potentially save beehives from being destroyed by viruses or other pathogens.

Interestingly, honey bees have fewer genes encoding proteins related to immune responses than other insects, and since the naturally-occurring RNAs in royal jelly contain sequences specific to several honey bee pathogens such as fungi, viruses, and bacteria, it has been proposed that the secretion of RNAi-inducing RNAs into royal jelly consumed by the next generation of honey bees is a sort of community-wide immune defense mechanism.

What Can We All Do to Help Save the Honey Bees? 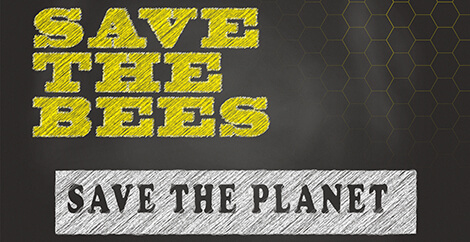 It probably cannot be overstated how important honey bees are to the global community, and there are several ways that everyone can get involved to help the bee conservation efforts.

There's a list of petitions online at savebees.org that you can sign to add your name the growing list of people that believe that the dying honey bee population is a big problem that requires attention.

There are also several websites dedicated to increasing awareness about this issue and providing resources for how to get involved, such as the Planet Bee Foundation, The Honeybee Conservancy, Greenpeace (Greenpeace even has a separate site specifically dedicated to saving the honey bees), and Häagen-Dazs ice cream.

You can also help create more awareness of the declining global honey bee population by just talking about the issue with friends and family. Sharing articles like this is a good start!

The views expressed here do not necessarily reflect the views of Active Motif. However, Active Motif does solidly support all researchers tackling the tough problems facing humanity and we look forward to continuing our development of innovative products and services to accelerate the advancement of gene regulation and epigenetics research.