Chromatin immunoprecipitation (ChIP) is extremely useful for studying chromatin biology and transcriptional regulation because it enables the localization of chromatin proteins, modified histones and transcription factors that are bound to specific DNA regions in specific cells. Furthermore, because protein/DNA interactions are fixed while in an endogenous, chromosomal context, ChIP results reflect the influence of chromosomal topology and the effects of cellular regulatory proteins.

The Re-ChIP-IT® Kit makes it possible to identify the simultaneous binding of two transcription factors or two histone modifications on a DNA fragment of interest. Chromatin that has been immunoprecipitated is removed from the magnetic beads with a special buffer that prevents the majority of the first antibody from participating in the second IP reaction. The chromatin is then desalted and a second ChIP is performed using a different antibody from the first. The cross-links of these sequentially immunoprecipitated protein-DNA complexes are then reversed and the DNA is analyzed by PCR, similar to conventional ChIP samples.

HeLa cells were fixed for 10 minutes with 1% formaldehyde and then chromatin was prepared by sonication shearing (5 pulses). ChIP was performed in duplicate on chromatin isolated from 750,000 cells. DNA was analyzed by PCR using GAPDH positive control primers (36 cycles, Tm = 59˚C). This figure was selected to demonstrate the successful sequential chromatin IP with two different antibodies using the Re-ChIP-IT Kit. The antibodies used are listed above the duplicate lanes.

The lane numbers are the same in each panel to indicate that the DNA is from the same chromatin sample. The left panel shows the results of PCR performed on an aliquot of DNA removed from the experiment after the first ChIP step, the right panel represents PCR results on DNA from chromatin samples after both ChIP steps. For example, chromatin samples subjected to first ChIP using Mouse IgG as a negative control (lanes 1 and 2 in the left panel) were then subjected to a second ChIP with an RNA Pol II antibody (lanes 1 and 2 in the right panel). Chromatin samples in which Mouse IgG was used as either the first antibody (lanes 1 and 2) or second antibody (lanes 5 and 6) show little amplification of GAPDH DNA in either the left (first ChIP) or right panel (first and second ChIP). Chromatin samples in which the first antibody used was anti-RNA Pol II and the second antibody was anti-TFIIB (lanes 3 and 4) show good amplification of GAPDH DNA after the second ChIP (right panel) indicating the co-localization of RNA Pol II and TFIIB at the same region of the GAPDH promoter.

Chromatin immunoprecipitation (ChIP) involves the immunoprecipitation of protein/DNA complexes that have been stabilized via cross-linking. It offers a versatile solution by combining the specificity of immunoprecipitation, the sensitivity of PCR and the screening power of array profiling. However, ChIP can be technically challenging and difficult to validate without well-proven reagents. By providing proven antibodies, reagents and controls, ChIP-IT Kits guarantee the best results possible. 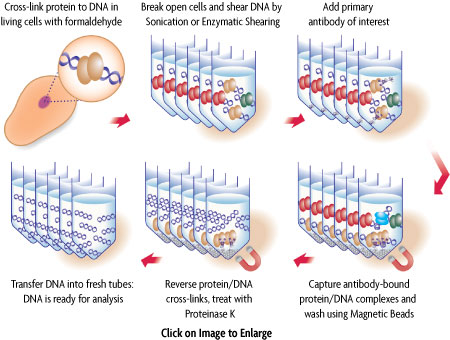 
In ChIP, intact cells are fixed using formaldehyde, which cross-links and therefore preserves protein/DNA interactions. DNA is then sheared into small uniform fragments and the DNA/protein complexes are immunoprecipitated using an antibody directed against the DNA-binding protein of interest. Following immunoprecipitation, the DNA is washed, cross-linking is reversed, and the proteins are removed by Proteinase K treatment. In standard ChIP methods, the DNA is then cleaned up using DNA purification columns. However, this DNA purification step in not necessary when using ChIP-IT Express (Figure 1). The DNA is then screened to determine which genes were bound by the protein of interest.

In Re-ChIP-IT, following formaldehyde fixation of the cells, chromatin is sheared and incubated with the first antibody, and antibody-bound protein/DNA complexes are precipitated through use of magnetic Protein G-coated beads. The captured “First ChIP” chromatin is then eluted with a specialized buffer that prevents the first antibody from participating in the second ChIP reaction. After the second ChIP reaction is completed with a different antibody, the cross-links are reversed and the released DNA is analyzed by PCR to examine the co-localization of the two proteins at a specific region of interest.

Classically, ChIP has been performed with antibodies directed against abundant chromatin components, such as acetylated histones. While this yields information about transcriptional activity of promoters, it does not reveal which transcription factor is bound to the promoter(s) of interest. In contrast, ChIP using transcription factor-specific antibodies enables direct monitoring of transcription factor/DNA interactions. Unfortunately, this is technically more challenging than classical ChIP, and requires the preparation of several complicated buffers, inhibitor cocktails and blocking reagents. In addition, result validation is difficult without antibodies, controls and a protocol proven to work in ChIP (Figure 2).

A PCR analysis of immunoprecipitated DNA is shown. This figure was selected to demonstrate the efficiency of the ChIP-IT Express Kit. Typically ChIP requires 2 million cells per reaction. However, we have been able to reduce the amount of starting material and observed positive ChIP data from 100,000 cells or less.

HeLa cells were fixed for 10 minutes with 1% formaldehyde and then chromatin was prepared by sonication shearing (5 pulses). ChIP was performed in duplicate on chromatin isolated from 100,000 and 750,000 cells using a Negative Control IgG and an RNA pol II antibody. The DNA isolated through these ChIP reactions was then analyzed by 36 cycles of PCR using GAPDH positive control primers. (These antibodies and primers are available as the ChIP-IT Control Kit – Human. Kits for mouse and rat are also available.) Ten µl of each PCR was separated on a 1% agarose gel and visualized by UV-illumination following ethidium bromide staining. PCR using the GAPDH primers on DNA isolated with the RNA pol II antibody reproducibly generated more product than similar reactions performed on DNA isolated using the Negative Control IgG.These results demonstrate that ChIP performed with RNA pol II antibody greatly enriched for GAPDH promoter DNA, while ChIP performed with negative IgG did not.

The Re-ChIP-IT Kit provides sufficient components to perform 25 Re-ChIP reactions. The Re-ChIP-IT Kit does not include the shearing components found in the ChIP-IT Express Kits. For this reason, the ChIP-IT Express Shearing & Enzymatic Shearing Kits are sold separately. We recommend that you also purchase whichever ChIP-IT Control Kit is appropriate for your sample type, as using proven controls helps in troubleshooting, interpreting your results and validating antibodies for use in ChIP.

Some select publications are listed below.