The epigenetic state of the cell is controlled by the activity of proteins that add and remove small chemical modifications to histones and directly to DNA. Aberrant epigenetic regulation can lead to changes in gene expression and the development of cancer. The link between epigenetics and cancer has been substantiated through the identification of mutations in or altered expression of epigenetic regulator proteins in many different types of cancer. These mutations have been identified in all three major classes of epigenetic proteins: the Writers (enzymes that deposit modifications), the Erasers (enzymes that remove modifications) and the Readers (proteins that recognize and bind epigenetic modifications). Recent drug development strategies that target these enzymes have resulted in four FDA approved cancer drugs, with many more on the horizon.

The “Readers” are a group of proteins that do not have enzymatic activity, but that function by recognizing and binding to specific epigenetic modifications. These proteins are thought to influence chromatin structure and function either by recruiting other proteins or by blocking Writers and Erasers from accessing specific modifications. The recent discovery of compounds that specifically inhibit BRD4 binding to acetylated lysines in H3 and H4 has created much excitement around this emergent class of new drug targets.

The “Writers” are a group of enzymes that act on histones and covalently add small modifications such as methyl and acetyl groups. Enzymes that add acetyl groups to histones are called HATs, while enzymes that add methyl groups to histones are called HMTs. Mutations and/or misregulation of these genes are found in many different human tumors. For example, EZH2, an H3K27 methyltransferase, is overexpressed in many tumors and EZH2 inactivating-mutations are found in large B cell lymphomas. In another example, the methyltransferase MLL is mutated via rearrangements and translocations in mixed-lineage leukemia, and more than 60 known MLL fusion partners have been described. MLL associates with the H3K79 methyltransferase DOT1L, and this association has led to the discovery that enhanced H3K79 methylation is associated with overexpressed genes in MLL-fusion leukemias.

The “Erasers” are a group of enzymes that act on histones to remove small covalent modifications. Enzymes that remove acetyl groups from histones are called HDACs, while those that remove methyl groups from histones are called HDMs. Mutation and misregulation of many different HDAC and Sirtuin genes have been associated with cancer. There are currently two FDA approved drugs (and four more that have progressed to phase II clinical trials) that function by inhibiting HDAC activity. Additionally, the histone demethylase LSD1 has been implicated in cancer. LSD1 is an H3K4/K9 demethylase that is over-expressed in multiple cancer types, and small molecule inhibitors have been identified that have potential as therapeutics. 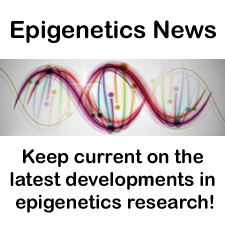