p53 is the most important tumor suppressor in the genome. It is responsive to numerous genotoxic stresses, which activates its transcription factor activity, in turn causing cell-cycle arrest by activating expression of p21 Cip/WAF. Mutant p53 that has lost its DNA-binding function interferes with the activity of native p53 and leads to oncogenic transformation. Alternatively, transformation may be caused by overexpression of Mdm2/Hdm2, an ubiquitin ligase specific for p53, which causes its destabilization. Inactivation of p53 is often coincident with hyperactivation of NFκB (NFκB p50 and NFκB p65), both of which serve to inhibit apoptosis.

Recombinant p53 is suitable for TransAM®, protein-protein and DNA protein assays. 1 ng is sufficient for a gelshift assay. The standard curve for TransAM p53 was generated using the range of 40 – 0.625 ng of protein. NOTE: The presence of Poly [d(I-C)] in buffers may affect protein functionality and should be avoided.

Full-length recombinant p53 protein was expressed in a baculovirus system with a His-Tag and purified by an affinity column in combination with FPLC chromatography. 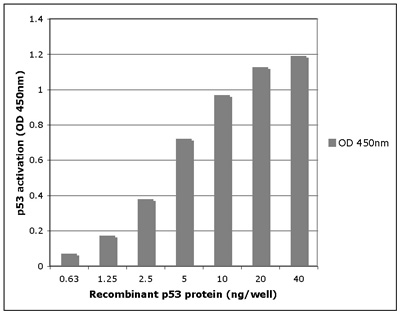