Recombinant Histone H3K27me3 (MLA) has been generated using the patented Methylated Lysine Analog (MLA) technology. In MLA, methylated histones are generated via a chemical alkylation reaction that substitutes a methylated analog of lysine, aminoethylcysteine, for the existing lysine at the desired residue. Aminoethylcysteine is structurally and chemically similar to lysine, though it contains a sulfide substitution in place of the lysine ϒ-methylene. The MLA technique provides precise control over the site and degree of methylation. The MLA technology is covered under U.S. Patent No. 8,278,112.

This product has been discontinued:
Please refer to our alternative product Catalog No. 31579

Recombinant Xenopus laevis Histone H3 trimethyl Lys27 (H3K27me3) is produced in E. coli and purified using FPLC. The protein contains a substitution of cysteine to alanine at amino acid 110. Recombinant methylated histones are specifically methylated via a chemical alkylation reaction that introduces a methyl lysine analog (MLA). This specific chemical treatment enables the site and degree of methylation to be controlled precisely. Each methylation reaction is over 99% complete, as verified by high-resolution ESI-TOF mass spectrometry. Protein concentration was determined using the molar extinction coefficient for Histone H3 and absorbance at 280nm. The recombinant histone is >98% pure by SDS-PAGE. The molecular weight of the recombinant histone is 15,300 Daltons. 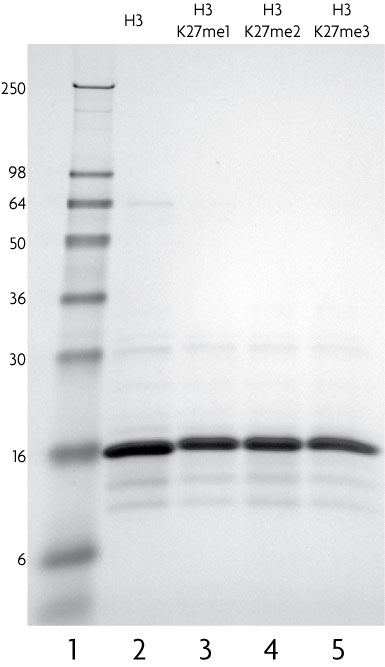